This site is all about decimal to binary. If you have asked yourself how to convert decimal numbers to binary then you have definitely come to the right place. To convert decimals to binary online, you most likely want to use a hassle-free tool. That is why you find our dec to bin converter right below; the conversion is discussed further down. We have a good number of examples and teach you the conversion method. Read on to learn all about decimal to binary.

Here’s our decimal to binary converter which will do all work for you. To use the conversion calculator enter a decimal number or set the desired value using the arrows, then hit the to Binary button. You will then be shown the result in the binary number system. Either use the reset button or overwrite the existing number to continue using our converter online. Chances are high that you will need our converter again in the future so make sure to bookmark our site now as convert decimal to binary calculator.

There are many reasons why you may need a decimal to binary conversion. Whereas the decimal (base ten) numeral system is made up of 10 possible values from 0 to 9, the binary (base two) numeral system only has the two values 0 and 1. If you are really into computing, then you probably want to learn about the conversion of decimal numbers to binary, as bits and bytes are represented in the binary system as zeroes and ones to the powers of two. The decimal binary conversion can easily be done manually, but once you got the hang of the conversion decimal to base 2 then you probably want to use our free tool below which does the conversion from automatically for you.

Our frequent conversions include, but are not limited, to:

Here we are going to show you how to convert decimals to binary. In fact, there is more than one. The first method is known as Short Division by Two with Remainder, whereas the second approach is called Descending Powers of Two and Subtraction.

The first conversion method we are going to teach is called Short Division by Two with Remainder. We will teach it by example using the number 197 (base 10) and convert it to binary. 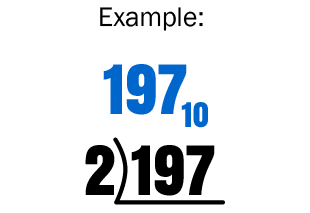 1. We begin by writing the decimal number with a subscript of 10 to avoid confusion with the base 2 notation. It’s recommenced you use paper and pencil to reproduce the example. Write the decimal number 197 inside an upside-down long division symbol as dividend. Prepend the base of the destination system: 2.

2. We write the integer answer (quotient) under the long division symbol, and make a note of the remainder (0 or 1) to the right of the dividend. The remainder is always 0 or 1 because we are dividing by two.

In our example the quotient is 98, and we have a remainder of 1.

3. Using the new quotient we repeat the above step until the quotient is 0. 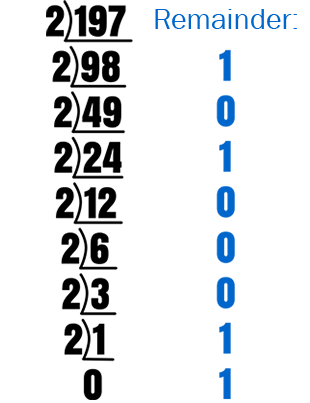 4. Starting from the bottom we write down the remainders until we reach the top. 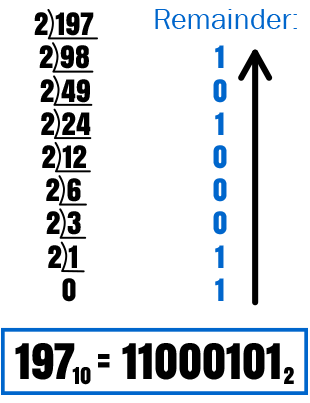 Converting from the decimal system to binary can also be done like this:

Now let’s turn to the second conversion method known as Descending Powers of Two and Subtraction.

1. First, we create a chart with the powers of two from right to left, starting with 20, which equals one. 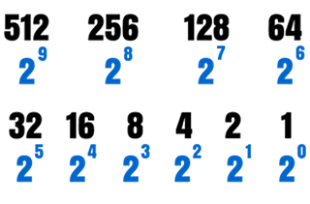 Increase the exponent by 1 until you reach the number close to the decimal you are starting with. We again use 197 as the decimal number. Then we make a row using the numbers from the chart. 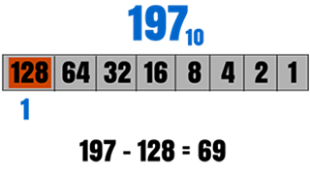 Write a 1 beneath your base 2 table’s leftmost binary digit. Next, subtract 128 from the decimal number you have started with. In our case of 197 the result is 69.

3. Move to the next lower power of two. If the number (result of previous subtraction) fits into write a 1, else a 0. In our example 64 fits goes into 69, so we write a 1 below it. 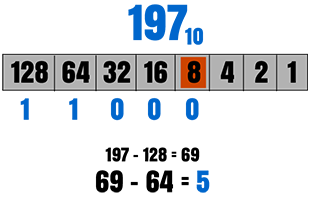 4. We keep on subtracting until we reach the end marking a 1 that goes into your new number. 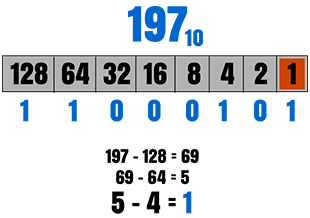 Write a 0 beneath the numbers who don’t.

5. Write out the marked numbers from left to right as result of . 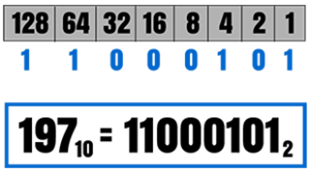 The sequence of 1’s and 0’s you have is the binary equivalent of the integer(decimal) you have started with. In our example you should have: 11000101

Observation: The above methods for any number, regardless how many digit it has.

Now that you know all about converting decimals to binary keep using our conversion calculator above.

Now we show you a couple of conversion examples:

You can always check if an example is correct by summing the powers of two.

3 comments on “Decimal to Binary”