Posted on by admin — No Comments ↓


You have come to our binary to decimal webpage. Here you can convert any binary number to decimal using our binary converter below. In addition, we show you the convert to binary methods, and then continue with bin to dec examples. If you only want to do a quick conversion then head directly to our binary converter. If, on the other hand, you want to understand all about the bin to dec conversion the check our methods section and examples first. As you will see, the conversion is really easy.

If you are really into computing and digital stuff then there will for sure come a time when you have to conduct a binary to decimal conversion. This is due to the fact that digital information is stored as sequences of 0s and 1s, that is in the binary system known as base 2. If you want to transform a binary value to decimal, also known as the base 10 system, then you are going to make a base 2 to decimal conversion. It is recommended studying our binary decimal conversion methods first, and once you understand how things are being done using out tool below for binary to dec operations.

Enter a binary number and then press the to Decimal button:

Above you can find our converter. Enter a number in the binary format. The hit the convert button to get the result in decimal notation. Our number conversion calculator not only shows the result in the output field, but also the powers of two which add up to the decimal value when being summed. This can be helpful when studying the bin to decimal conversion methods below. You can always check if the manual method produces the same result as our converter.

We recommend you use the tool above to convert from binaries to decimal. Our keep on reading to learn all about converting using our methods below. If you have any questions left or believe something about converting numbers in base 2 is missing on our site then get in touch with us. We really appreciate any feedback to improve our page and / or tool. Also, if you like our content then please give us a Like or hit any of the sharing buttons. Thank you!

We start the first conversion method called Positional Notation by writing down the binary number in base 2 notation. We use 110001012 as example which translates to 197 in the decimal system.

1. List the powers of two from right to left, beginning with 20, which equals 1 in the decimal system. Next, we increment the exponent by one for each power of two until the amount of elements in our list is equal to the amount of digits the binary number has. 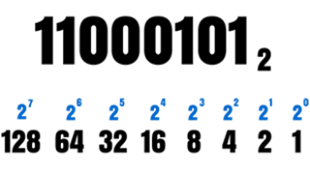 In our example we write 11000101 below the list of binary numbers such that each digit of the binary number corresponds with a power of two.

3. We match up the the digits of the binary number with their corresponding powers of two by drawing a line between them.

It doesn’t matter if you start left or right. Just continue drawing lines until all powers of two and digits are connected.

5. We add the final values up. 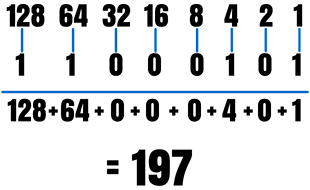 6. We write down the result of the conversion using subscripts:

Now, let’s have a look at our second conversion method. This approach is called Doubling and does without powers of two.

1. We start by writing down the binary number we are going to convert to decimal. We again use 110001012 as example.

2. We double the previous total and add the current digit. The initial total shall be 0.

3. We double the current total: Then we add the next leftmost digit. 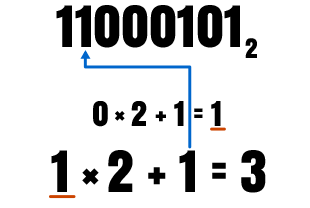 4. We repeat the previous step. 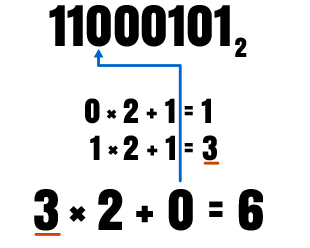 5. We repeat the previous step once more. 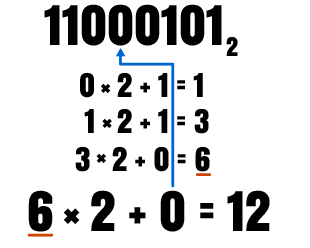 6. We repeat the previous step once again. 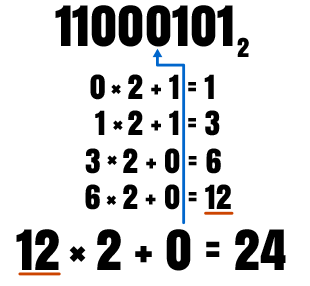 7. Again, we repeat the previous step. 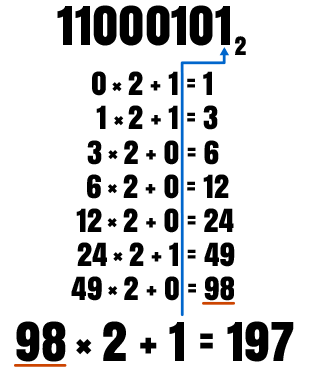 8. We keep doubling the new current total whilst adding the next leftmost digit until there are no more digits left. 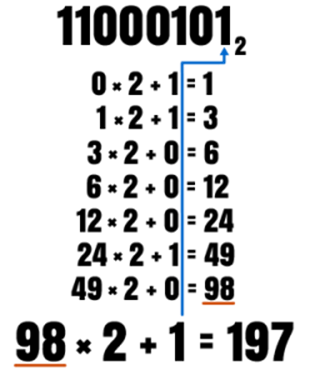 9. We record the answer along with the respective base subscript.

You can verify that the examples are correct by adding the powers of two.
Below you can find some more binary to decimal conversion examples.